The caped crusader is a singing heroine who fights for all people, but especially those who have disabilities. Her message empowers people with disabilities who have been wronged or hurt and fights against those who cause the hurt. 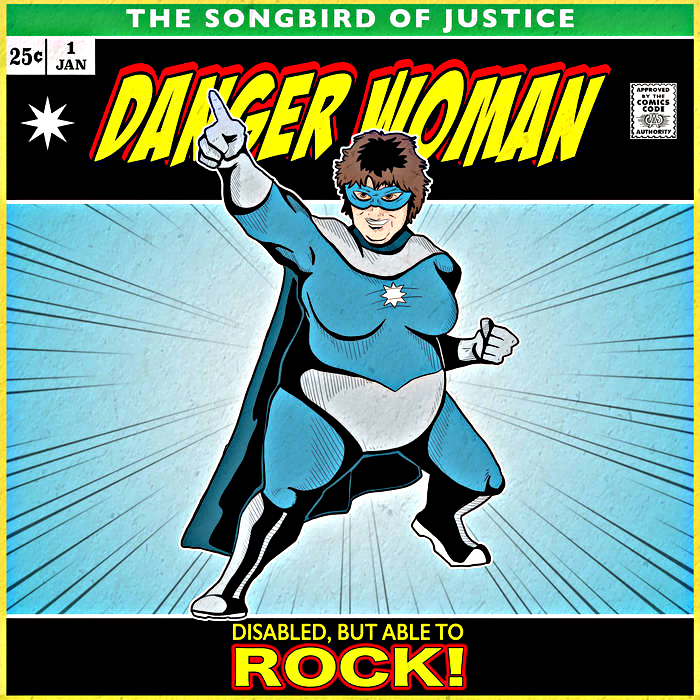 On her website, Goodrich identifies Danger Woman as a “real-life singing superheroine (RLSSH), who uses her special powers to right wrongs, give evil a headache and keep Atlanta, Georgia safe from the forces of evil.”

Danger Woman debuted in 1992 for two reasons: 1) Goodrich noticed all superheroes had causes, but none supporting people with disabilities; and 2) she also wanted to educate about disability sensitivity (acceptance, awareness and advocacy).

Goodrich herself was diagnosed with autism earlier in her life and says she works to right the wrongs done to people with disabilities.

Danger Woman, says Goodrich, speaks for those who cannot speak for themselves. She feels Danger Woman’s biggest accomplishment has been speaking up for people with disabilities who are wrongly blamed or committed or incarcerated in hopes they will be pardoned.

“I speak for the [people with disabilities] who are prisoners of their conscience, who have been denied justice and are locked up,” Goodrich explains.

Goodrich uses her singing to share her message to the public performing at Vinyl at Center Stage and at the annual Dragon Con held in Atlanta where she draws a standing-room-only crowd. Her next shows are coming up at the end of August.

She has an album, “Danger Woman: Disabled, But Able to Rock” as well as several of her songs on her Facebook page, where she has amassed quite a following. She shares her message far and wide, as well as supporting other real-life superheroes fighting for people with disabilities around the country – just like herself.

Download the large print version of the Summer 2019 issue.