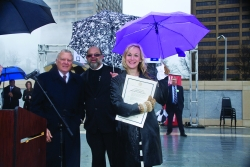 “Each year, I’m inspired by the crowd that gathers for Disability Day at the Capitol, a crowd that’s as diverse as the State they call home,” said Governor Nathan Deal to Making a Difference. “This level of support demonstrates that disabilities affect us all. I hope that all Georgians will take the time to listen to and advocate for all citizens with disabilities in our State.”

Even with low temperatures and steady rain, the event was met with excitement from advocates, people with disabilities and supporters. To show the power of the collective voice and advocacy, GCDD’s Disability Day theme commemorated the 25th anniversary of the Americans with Disabilities Act (ADA) by titling this year’s event, “Fulfilling the Promise of the ADA.”

In front of the crowd, Deal proudly proclaimed that March would officially be Disability Awareness Month and recognized July 26th as the 25th anniversary of the ADA.

“We must preserve the past by remembering those who fought for your rights. We must also celebrate our present by commemorating the 25th anniversary of the ADA, and we must continue to educate others about accomplishments and barriers that still exist for people with disabilities,” said Governor Deal, who has spoken at Disability Day for the past five years.

The Governor’s proclamation was presented to GCDD at the event that brought together advocates from across the State to promote access, opportunity and meaningful community living for Georgians with disabilities and their families.

A variety of groups brought their enthusiasm to the annual kick-off at the Georgia Freight Depot to raise awareness about the rights and concerns of people with disabilities. At the gathering, attendees made posters advocating for equal opportunities in education and the workplace knowing that the contributions of people with disabilities are important to the community.

GCDD Executive Director Eric E. Jacobson kicked off the event with a rousing speech highlighting the importance of how the ADA and the civil rights efforts of the 1960s were tied together.

“There wouldn’t be an ADA if Americans had not fought for civil rights in the 1960s. While Dr. [Martin Luther] King and Rosa Parks fought in Montgomery to get a seat on the bus, there are many people here who couldn’t even get on the bus, and especially here in Atlanta where they fought to make sure that people who use wheelchairs could get on the bus,” said Jacobson.

Jacobson also announced GCDD’s continued support for closing all institutions in Georgia, and the Council’s goals for the following year. “Kids and people don’t belong in institutions. They belong in communities with the rest of us. They belong by having a job, going to school, living in their own homes with their own keys to their own doors. They belong as a part of being able to build a church or synagogue or temple or mosque or wherever they want to pray,” said Jacobson. “They belong in our communities and it’s time that Georgia closed those doors to make sure that nobody ever again is locked up somewhere for no crime at all.”

GCDD will be working over the next year to create a report card on how well Georgia is doing as it relates to employment, community living, students graduating from high school and transitioning into adult life, healthy living and early childhood. The report card will be based on national goals established by Six by ’15.

Six by ’15 is a national campaign celebrating the 40 years of the Individuals with Disabilities Education Act and 25 years of the ADA. The initiative is building a new future by joining efforts to achieve six national goals in the following areas by the end of 2015:

As this year marks the anniversary of the ADA, it is also an important milestone in the civil rights movement. 2015 celebrates the 50th anniversary of the Selma-to-Montgomery march that took place in Alabama in 1965. Tying in the ADA anniversary’s message of “Disability Rights are Civil Rights,” this year’s Disability Day received a special message from a civil rights activist and leader who has paved his own history along the way, and was present on that historic day in Selma.

US Representative John Lewis (D-GA 5th District) sent a message of support to the crowd at Disability Day remarking on the importance of continuing the fight and causing “good trouble, necessary trouble.”

“None of us, not one of us, not any of us must be left out or left behind. I will continue to stand and fight for what is right and fair and just,” said Lewis in a recorded statement. (Read his complete statement on page 11 or watch the video at gcdd.org.)

The event also saw the talents of Joey Stuckey, an award-winning guitarist and vocalist who is blind and advocates for accessible music education for everyone. Stuckey sang “The Star-Spangled Banner,” “Georgia On My Mind,” the official state song of Georgia and “This Little Light of Mine.” Stuckey is also the official music ambassador of Macon, GA.

Reverend Susannah Davis, pastor at Kirkwood United Church of Christ, inspired the crowd by reminding them although the ADA has brought the community a long way, there is still much to be done.

“ADA was a beginning – a strong and safe way for everyone to be able to attend, to participate, to create, to contribute, to live fully and faithfully, but we’ve still got a long way to go,” she said. “We’ve got more ramps to build, more elevators to purchase, more lifts to put in place, and that’s not all. We need more accessible ways to belong to the workforce and service organizations, to be leaders in government, to blaze the trail for public policy, to shine our light in arts and entertainment, to make a way in whatever it is you dream about, a way for you to be you fully and wholly.”

Disability Day at the Capitol is an opportunity for the disability community and their supporters to connect with each other and their elected officials. This year’s focus on the ADA coincides with GCDD’s mission and legislative agenda that concentrates on achieving inclusive communities, voting rights and access to education and jobs.

In Making a Difference’s Winter 2015 issue, GCDD outlined areas such as education, employment and Unlock The Waiting Lists! where they would be advocating for more services and supports during the legislative session.

At the time of this writing, some advocacy successes included the Georgia House of Representatives funding 75 new NOW/ COMP waiver slots and a 50-cent-per-hour increase for personal support services in ICWP Waivers.

Employment First had a big achievement as Georgia House Resolution 642 created the Joint Study Committee on Postsecondary Education and Employment Options for Individuals with Intellectual and Developmental Disabilities. (For complete coverage on the legislative session, read the Legislative Recap on page 18.)

Frequent Disability Day guest Senator John Albers (R-District 56) brought cheer to the crowd to remind them of the importance of Disability Day.

“You have got our commitment to help you to just give sunshine to this cause,” said Albers. “We have lots of good things happening, and I tell you this every year that if the world saw everything through the lens of somebody with special needs, it would be a better place to live.”

GCDD Chair Mitzi Proffitt called for a recommitment to the ADA in the remaining months of the 25th anniversary celebration. “Across the country people are signing
the pledge with the goal of getting 2,500 signatures by July 26th recommitting to the legislation,” said Proffitt.

The goal of the pledge is to reaffirm the principles of equality and inclusion and recommit efforts to reach full ADA compliance. Organizations and faith communities are being encouraged to sign the ADA proclamation.

Closing the rally was Mark Johnson, director of advocacy at the Shepherd Center and chair of The ADA Legacy Project. He organized the crowd as they marched back to the Georgia Freight Depot, and reminded them of the 2003 Free Our People March from Philadelphia to Washington, DC and the historic Selma-to-Montgomery march.

As the crowd gathered to go back to the Depot, Johnson reminded everyone that, “We need to go forward. Let’s quit saying, and let’s start doing.”

To sign the Americans with Disabilities Act pledge, visit www.adaanniversary.org/pledgeon.