Over 1,000 people from across the country are meeting at the Grand Hyatt Hotel to hear about the policy issues important to people with developmental disabilities and their families. For two days we are hearing about the issues in preparation for visits to Capitol Hill on Wednesday. There are two important themes to this gathering. The first is about how to support a bipartisan atmosphere. This may seem like an altruistic idea given the current political climate where on many issues Democrats and Republicans cannot agree. However there are many people who think that we can get disability related legislation passed because it is a bipartisan issue. We have argued for years that disability does not care if you are Republican or Democrat. 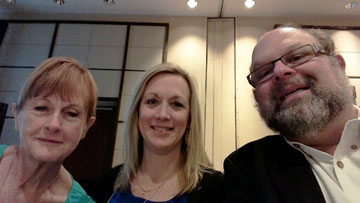 GCDD Executive Committee Member Josette Arkhas, GCDD Chair Mitzi Profitt, and Eric Jacobson advocate at the nation's capital for disability rights. Yet, there are several significant pieces of legislation that have not passed and many argue it is simply because of the current climate. The United States still remains one of the only developed countries to not ratify the United Nations Convention on the Rights of People with Disabilities. Senator Tom Harkin, one of the authors of the ADA has pleaded for this to take place during the week of July 21 as his outgoing legacy before he retires. The Senate is just six votes shy of having enough votes to pass the legislation and both Senators Chambliss and Isakson have indicated they will vote against this Bill. Our job, my fellow Georgians is to convince them that they should vote in favor. Please call their offices and encourage them to vote for the Convention on the Rights of People with Disabilities. the ABLE Act, and Employment First.

Many of you will remember that Ambassador Gallegos spoke at Disability day at the Capitol a few years ago. He was one of the primary authors of the Convention on the Rights of People with Disabilities. The Senate is six votes shy of passing this Treaty. Neither Senator Isakson or Chambliss have signed on as a supporter. They tell us they have not heard from people in Georgia who support the Treaty. We need you to call their offices today and ask them to vote in favor of giving people with disabilities the same rights as those in the US.

The second theme was about thanking our champions who are retiring and trying to identify our next champions. Senators Harkin and Rockefeller have both fought hard for the rights of people with disabilities and both will leave the Senate in January. We have several representatives who are running for the Senate seat being vacated by the retirement of Senator Chambliss. We thank Senator Chambliss for his many years of service to our State. Now is the time to ask Rep Brown, Kingston, and Gingrey where they stand on issues related to disabilities. How has their voting record supported people with disabilities?

This is a critical time for many ideas that will improve the lives of people with disabilities and their families. I am sure that we can have a positive impact.