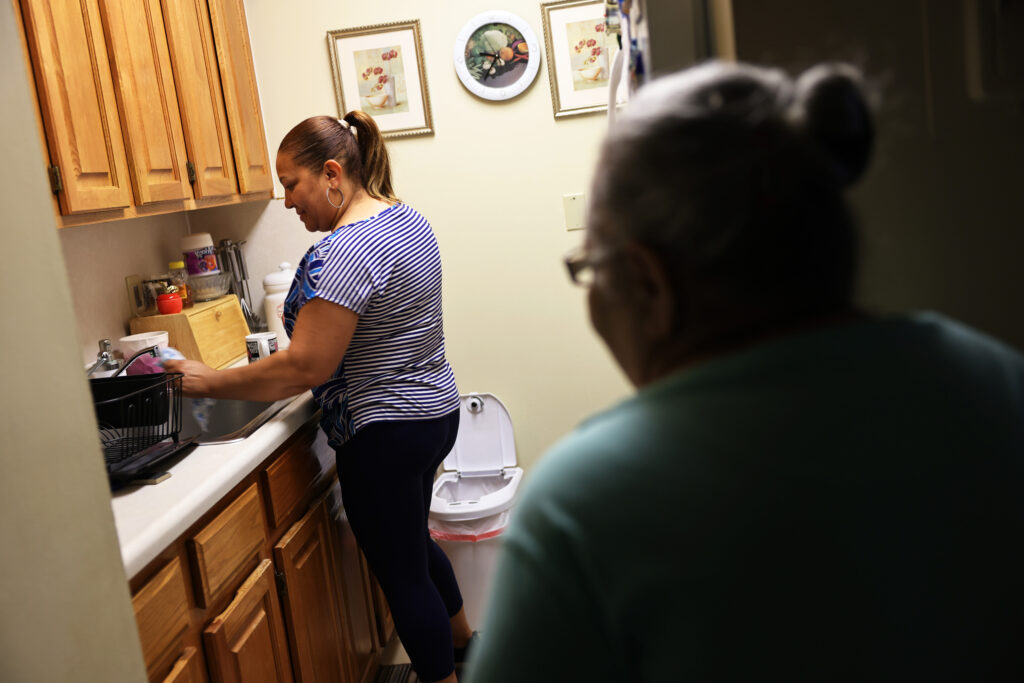 A care provider association in Georgia that serves people with disabilities is sounding the alarm over the extent of the current staffing shortages, which have worsened during the pandemic. Michael M. Santiago/Getty Images

As a nurse working at a metro Atlanta hospital, Becky Turner is part of a workforce experiencing well-known staffing shortages as the pandemic persists.

But as the sister of a 58-year-old woman with Down Syndrome and Alzheimer’s Disease who uses a wheelchair, the Lawrenceville resident and her family are also at the mercy of another workforce crisis that is unfolding more quietly in homes and at facilities serving people with disabilities. 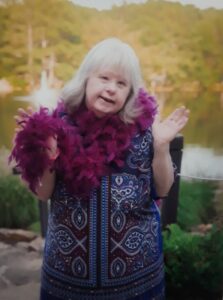 Gretta lives with her sister, Becky Turner, in Lawrenceville where she needs constant supervision and support. A staffing shortage, though, has made it harder to find a direct-support professional to provide her care. Photo courtesy of Becky Turner

Turner’s sister, Gretta, lives with her in a basement apartment and receives services at home through Medicaid.

“We promised – me and my sister – our parents that we would always take care of her, that she would never have to go into a home,” Turner said.

Gretta, though, needs constant supervision. So, when Turner leaves for a long weekend shift at the hospital, she relies on the assistance of workers known as direct-support professionals to come care for her sister.

Those workers have become increasingly scarce during the COVID-19 pandemic as they risk exposure to the coronavirus and as less-stressful jobs at stores like Target and some fast-food restaurants offer higher pay.

The staffing shortage has left Turner scrambling at times to make last-minute arrangements with family to care for Gretta. When she cannot find someone, she is left with no choice but to call into work so she can stay with her.

Turner has called into work three times lately, which she knows puts the hospital and her exhausted colleagues in a bind. Likely, someone else is paid overtime to cover for her.

“This costs the hospital money, it’s an inconvenience for the other people, and then, you know, I’m just eaten up with guilt and feel terrible,” Turner said. “But I feel like I have no control.”

Still, she said she feels fortunate.

“I feel really bad for the people who have no family, who have no one,” she said. “I don’t know what they do in those situations.”

The low pay for direct-support professionals has been a growing national problem for decades.

But a provider association in Georgia that serves people with disabilities is sounding the alarm over the extent of the current staffing shortages, which have worsened during the pandemic.

“Providers must be funded to provide a competitive wage or the dangerous and potentially deadly consequences of ignoring this population will come to bear,” the group wrote in its letter. “People will be dropped off at fire stations, emergency rooms or returned to family’s front doorstep. This is not overly dramatic. Much of this has already occurred.”

The letter continued: “DSPs (mostly single African American women) are exhausted, growing impatient and angry. They are fearful of making a mistake due to exhaustion. They are leaving the work they love to take a job with far less social impact but more money and substantially less rigorous work. These employees are the working poor.”

The state Department of Behavioral Health and Developmental Disabilities tracks a range of incidents that happen in home and facility settings, including injuries from falls, medication errors and other mishaps likely to happen when workers are overextended or there are not enough of them present.

The total number of all reportable incidents, which include COVID-19 cases, doubled from late 2019 to last winter, according to a report compiled by the department in response to an inquiry for this article. So did the number of substantiated reports of abuse, neglect and exploitation. But it’s hard to draw conclusions from the data available on whether there has been a notable uptick in mishaps.

The staffing shortage’s clearer impact may be the workers’ absence.

“It is a grave concern at this moment,” Ron Wakefield, director of DBHDD’s division of developmental and intellectual disabilities, said of the staffing shortage.

“Because if we don’t have the direct professionals to provide supports for the population we serve, it’s not going to look good at all for those people in terms of the quality of services and the level of service supports that they need.”

Some providers have reported being unable to cover all the hours of care needed, leaving people with disabilities and their loved ones without the support they need and hampering efforts to reduce the list of thousands of people waiting to receive services in their home or community through Medicaid.

“This in many ways is the issue of the day,” said Eric Jacobson, executive director of the Georgia Council on Developmental Disabilities. “Because we do not have enough workers, the waiting list cannot be addressed. If we get people off the waiting list but there are no direct support people, then we really have not gotten anyone into services.

“Part of the issue is that if McDonalds and other fast food places are now paying $15.00 an hour and DSPs are getting paid $10.00 an hour for much harder work, what would you choose?”

Diane Wilush, who is the CEO of United Cerebral Palsy of Georgia, said she worries the staffing shorting is taking a toll on the remaining workforce.

Wilush pointed to her own organization, which has not been able to fill about one-third of its positions. That means existing staff are left to pick up the slack. 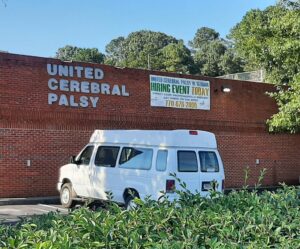 A sign for a hiring event is up at a United Cerebral Palsy location in Atlanta. The provider is among those struggling to hire enough direct-support professionals. John McCosh/Georgia Recorder

Exhaustion has set in, though, and Wilush said UCP is struggling to entice people to pick up more shifts even when offered overtime and an extra pay bump for working in a COVID-positive house.

“We’re teetering in this very, very precarious, potentially dangerous, potentially life threatening (situation) where we can’t provide enough staff,” Wilush said. “And UCP is not at all an anomaly.”

At some places, the CEOs are working in homes because there’s no one else, and when possible, providers are pulling in staff from out of state.

The providers are pressing the governor and state lawmakers to boost the pay of these workers serving the state’s most vulnerable residents so providers can at least offer competitive wages.

Right now, the state’s base Medicaid reimbursement rate for residential service providers is $10.63 an hour, although not all workers even make that.

Providers are asking state officials to devote federal coronavirus relief funds to bringing worker pay up to at least $15 per hour – and then commit to continue that funding in the future.

The providers’ plea for help with staffing, though, is not the only one state leaders are hearing.

“We are aware of the issues not only within the home and community-based providers, but health care in general,” said Rep. Terry England, an Auburn Republican who is the House’s top budget writer.

“Going beyond this area, we are seeing it across all service sectors that the state is involved in through contractors as well as our own state employees,” he added. “I have met and talked to several of these providers over the last couple of months and will be seeing what we can do to help.”

England said budget writers are wary about leaning on one-time federal funds – or even revenues from a surplus that are not sure to continue – to pay for a recurring expense.

The push for more funding comes as state revenues were up a record $3.2 billion last year, teeing up debate over how best to use the funding. Gov. Brian Kemp instructed agency heads to stick to last year’s spending levels. Wakefield’s department submitted a flat budget request. The governor will unveil – and then hand over – his proposed spending plan to the Legislature in January.

The state agency is also dealing with a staffing shortage at state-run facilities, causing dozens of beds to remain empty.

State leaders earlier this year approved a small rate increase for providers – a 5% increase at a cost of $12 million – which is still awaiting approval from Centers for Medicare and Medicaid Services.

The state has also submitted plans to use a portion of the coronavirus relief funds from the American Rescue Plan to address the staffing shortage. About $64 million would go toward a temporary wage increase and an independent rate study that could help build the case for the governor and state lawmakers to sign off on a permanent rate increase later. The rate study would take more than a half year to complete.

Wakefield said the proposed temporary increase may not bring worker wages up to $15 per hour. But he said he hopes the pay bump will help carry providers through a dire moment in the pandemic.

“If we can start bridging the gap with the (federal) funding and then hopefully long term, we will look to the General Assembly to hopefully come in and assist,” Wakefield said.

It will take time for the federal coronavirus relief funds to make their way into the pockets of workers, though.

‘At the end of the day, you’ve still got to live’

Ernestine Bryant, a direct support professional who works at a Tifton group home, said addressing the pay would be a good starting point, although she says job candidates still need a heart for work.

“We would tell people what all they have to do and what’s the job description and everything, and then they say, ‘What’s the pay?’ Once we tell them the pay, that’s out of the question. ‘I have to do all that for that little bit of pay?’ Yeah. So that let’s you know right there.” 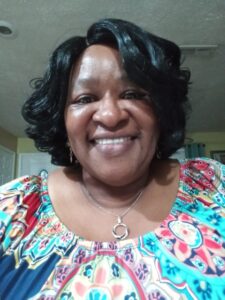 Still, Bryant said she loves her job. The grandmother, who is known as Erma, has come to see the people depending on her as family. She looks forward to their smiles when she shows up for her shift, seeing their joy during a trip to the mall or a local strawberry patch, and hearing their tales of birthday parties, visits with family and other special moments.

But these days, she’s not sure how much longer she can go on.

After five years earning $9 an hour as a direct-support professional helping with baths, meals and their other basic needs, she recently saw her pay increase by 50 cents an hour.

Before the pandemic, she held a second job as a substitute schoolteacher to supplement her income, but she quit over worries she might bring the coronavirus back to the vulnerable people she serves.

“It is sad to love a job and you got to leave because you are just used to making it from paycheck to paycheck and the pay is not enough,” Bryant said. “At the end of the day, you’ve still got to live.”

For now, Bryant is hanging in there even as she watches others leave the role for better paying jobs.

“With the economy keep going up, you can’t keep living off $9 an hour and $9.50 an hour,” she said. “You are having to work two jobs to make ends meet because you’re living from paycheck to paycheck, and it shouldn’t be that way.

“People don’t understand when you are not in that individual’s shoes that live in that way,” she added.