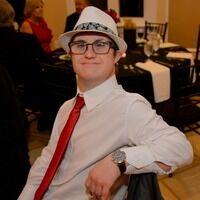 27-year-old Holton has appeared on television on numerous occasions. In 2013, he appeared on Home and Family by Skype to discuss his winning homecoming king at South Effingham High School. He also appeared on Fix It and Finish It in 2015, alongside Antonio Sabato, Jr.

Currently, Holton is an active part of the Lowcountry Down Syndrome Society where he serves on the board as Vice President.

In his free time, Holton is an avid equestrian as well as a history and movie enthusiast. He enjoys frequent visits to the Savannah Theatre, traveling, and spending time with his friends.

Treasure Maps is a pop-up, interactive, drive-in theater that will include live local hosts, installations, and safe interactive activities. Each show will feature the film screening of Treasure Maps, a collection of 10 Georgia Storytellers’ Life Maps which provide an up-close and personal viewpoint on navigating life as a person with a developmental disability.

The Lowcountry Down Syndrome Society will be participating in this event in partnership with the Georgia Council on Developmental Disabilities, L’Arche Atlanta, StoryMuse, and Resurgens Impact Counseling.This project aims to bring the community together while observing current safety and social distancing practices in light of the current pandemic. It will also shed light on the current issue sitting before Georgia State Senate and Congress regarding the years-long Medicaid waiver waitlist. Currently, members of the disabled community are unable to obtain crucial services without access to the funding.

Shannon M. Turner, creative director of the project, says “We want to provide a virtual stage for the important stories of people with developmental disabilities, inviting their stories in from the margins to the center of our communities. But an equally important component is to provide education and advocacy to the general population and legislators around the Medicaid waiver, a vital funding structure which supports the lives of people with developmental disabilities so they can live independently.”

Each show will be produced in collaboration with local community members and will be co-hosted by a storyteller (the “Show Marshal”); a local community member; and a Treasure Maps team member. The show will run approximately an hour and a half and will include interaction with the co-hosts and an invitation to direct advocacy action.
The tour will be making stops in Dahlonega, Athens, Savannah, Macon, Columbus, and Atlanta, with the Savannah show taking place on June 24 from 8 to 10 p.m.

This article was originally published in the Savannah CEO on 5/21/2021.

It was also published in the following outlets: