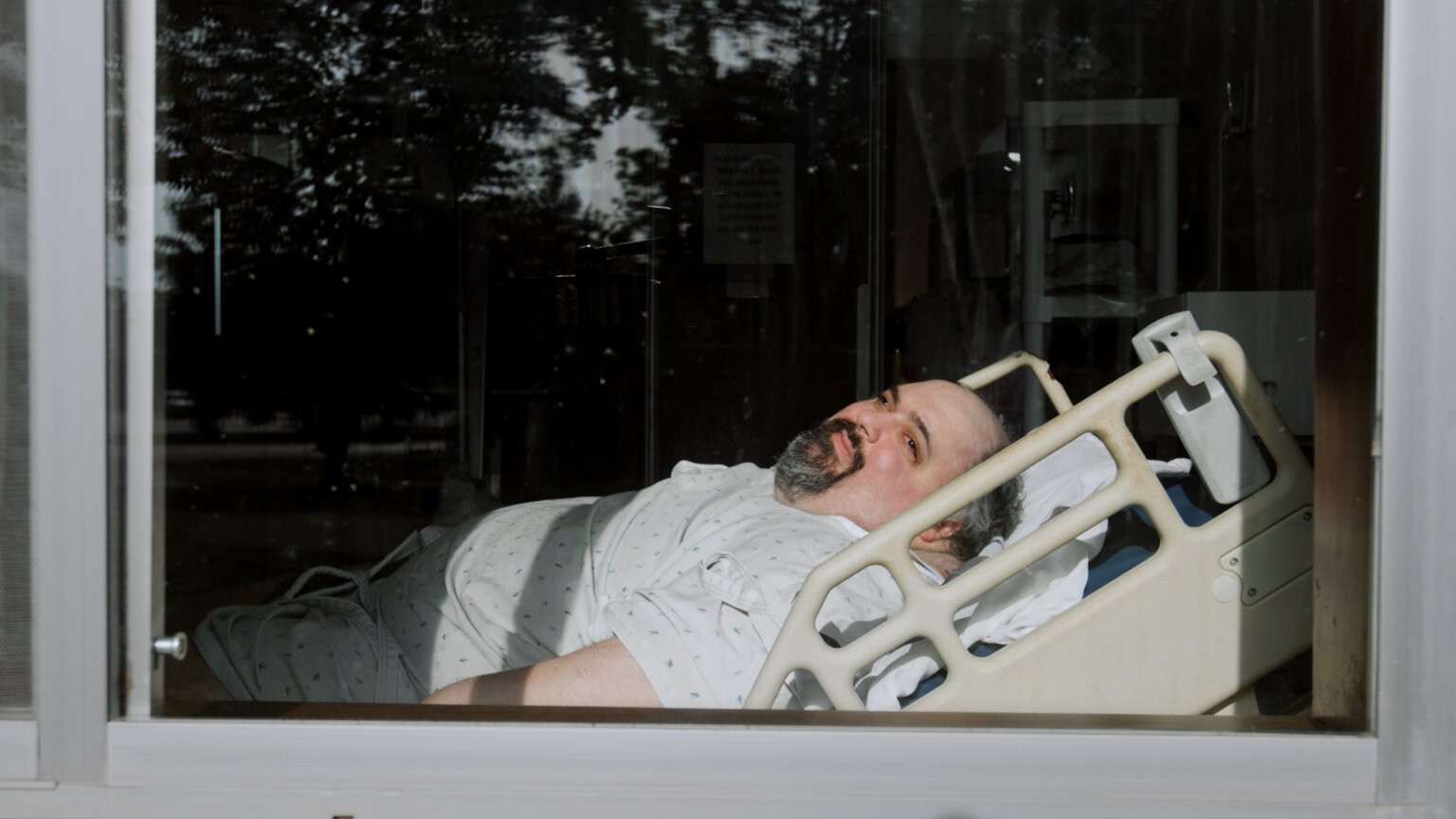 Nick Papadopoulos, a 43-year-old who has been in a Royston nursing home for four years, is featured in a new film about the wait list for services in Georgia. Photo courtesy of the movie 6,000 Waiting.By Jill Nolin - May 25, 2021

The move into a nursing home in Royston was supposed to be temporary for Nick Papadopoulos, who was a 38-year-old living in Athens when an infected bedsore landed him in the rural northeast Georgia facility.

Four years have now passed, which brought a pandemic that was particularly ruthless inside long-term care facilities. Papadopoulos has fought off COVID-19, twice. When a friend visited, he watched from a safe distance as she handed a gift to a staffer, as if it were contraband.

Despite the crushing wait and an especially dispiriting last year, Papadopoulos continues to chase down potential exit strategies from the bed in his room.

“I’m always hopeful,” he said. “Because even when times are at their darkest, you turn the corner and there’s that bright spot. And things can change in a matter of moments. Never give up, never surrender is my tagline.

For now, he is trying to gain approval for a limited type of aid for people with physical disabilities that will cover some of the care Papadopoulos needs to live independently again.

Papadopoulos, who has cerebral palsy and uses a wheelchair, needs help during the day and at night. Moving from his bed to his chair, for example, can require the assistance of two people. He also needs help getting dressed, bathing, preparing food and other personal care tasks.

If he is approved for the aid, he would still need to come up with more than $50,000 a year to pay for the rest of the care he would need, which he hopes to cover through fundraising and the entrepreneurial ideas that are swirling in his head – like designing T-shirts with socially progressive messages empowering the disability community.

In a slight setback, Papadopoulos has been told he needs to arrange caregiving before he can be approved for the public aid, so he’s interviewing people this week who have responded to a job ad he posted. He is also trying to find a roommate with similar needs to stretch his resources further.

This scenario is not ideal, but it would accomplish his short-term goal: Get him out of the nursing home.

“I’ll take whatever I can get,” he said of the aid.

Papadopoulos had hoped to receive broader services through a state-run program, known as the New Options Waiver (NOW) and Comprehensive Supports Waiver (COMP) through Medicaid, that is designed to help people with disabilities avoid institutionalization. The waivers are funded largely by federal dollars.

His predicament is featured in a new film called 6,000 Waiting from the Georgia Council on Developmental Disabilities and L’Arche Atlanta that premiered earlier this year. The number of people lining up for services has grown just since the short movie was filmed two years ago.

As of early May, the list included more than 7,200 people. State lawmakers have been funding about 100 to 250 waivers each year in recent years; for this coming year, they added about $2 million to the budget to cover about 100 slots.

This year, though, the state Department of Community Health has proposed a change that could mean more people receiving services while stretching existing funding a little further. But advocates say that would happen at the expense of dozens of people with disabilities who count on the aid to live as they choose.

At least 188 people who currently receive up to 24-hour care in their own or family home would see their aid limited to 16 hours under a plan still under review. The cost to provide these services is about $22 million, with the federal government picking up a little more than half the cost.

That has left their families weighing whether to seek different living arrangements – such as living with three roommates and sharing support staff at a licensed provider home – or coming out of pocket to make up the difference so their loved one can stay where they are.

“We understand these are very difficult decisions to be made,” DCH Commissioner Frank Berry said at an agency board meeting earlier this year. “This is a difficult day but it’s also an exciting day for us to be able to begin to think about those 7,000 people that are on the current planning list and the 2,000 on the short-term planning list that are in desperate need of care.”

The state Department of Behavioral Health and Developmental Disabilities, which administers the program, was unable to provide an estimate for the number of people who could come off the waitlist as nearly 200 others see their at-home services limited.

“The goal is to provide services that allow Georgians with intellectual/developmental disabilities to live in their communities and make those opportunities available to as many people as possible,” David Sofferin, director of public affairs, said in a statement.

Sofferin stressed that the list is a long-term planning tool, not a registry of people actively awaiting services, and that some people on the list, such as children, may also receive other types of aid. People with higher needs are moved up the priority list, particularly as their circumstances worsen.

The Centers for Medicare and Medicaid Services must still sign off on the changes. A spokesman offered no timeline for a decision when asked last week.

Pam Walley is hopeful the federal agency will halt the proposal from moving forward. Otherwise, Walley said the change could drastically alter life for her 26-year-old daughter, Callie Moore.

Walley is also the quality and compliance director with Georgia Options, a service provider that focuses on supporting people with disabilities through non-congregant settings. For her daughter, that means she lives in her own apartment in Athens with a roommate with whom she shares overnight staff support.

“Callie’s been living on her own for a year now and she’s flourishing. She’s living the life she has wanted to live for a long time, and it horrifies me to think she’s going to lose that,” Walley said.

That means visits to the botanical garden on the University of Georgia’s campus and to downtown Athens where she likes to soak up the sounds of people talking and enjoying themselves. She spends much of her time on advocacy work.

But Moore’s needs are extensive, with each day beginning with hours of medical treatments. She cannot speak without great effort, so her support staff, family and friends have learned to communicate with Moore by asking questions and then reading her facial expressions and eye movements for her response.

“It’s challenging, and we regularly talk with her about the frustration that she feels,” Walley said. “Because she understands everything, and she’s got plenty she wants to say, but she’s got to wait for somebody to ask the right question.”

People have asked Walley why Moore cannot just live with three other people who need similar care, and she says her response is simple: Her daughter doesn’t know three people she’d want to live with.

But Walley also argues the change the state is pursuing is a move in the wrong direction. Seventeen other Georgia Option clients would also be affected.

“If we tell these 188 people, ‘You’re too disabled to have the same protections that other disabled people have. You 188 – y’all are too much. Y’all have got to live where we tell you,’ then who is next?” Walley said.

“It would reverse a lot of the progress that’s been made over community inclusion and people self-directing their own lives when we start taking little bits away,” she said.

Pushing for other options

Advocates are putting fresh energy behind another way to shrink the wait list: Increase the overall resources available for people with disabilities.

“We’ve basically said, as a society and as a state, we don’t think it’s a priority to address the waiting list,” said Eric Jacobson, executive director of the Georgia Council on Developmental Disabilities. “If we did, we would be figuring out ways to address it on a larger scale, and we haven’t.”

In the last decade, the state has not funded more than 250 slots in any given year, according to the council, which advocates every year for the state to increase funding for the waivers.

Jacobson said he’s watching a federal proposal that would make the services that more than 7,000 people are seeking through waivers mandatory instead of optional, as they have been since they were created in the 1980s. The measure, he said, would upend a Medicaid system that defaults to care provided in group settings and wipe out the wait lists nationwide.

There are also provisions in President Joe Biden’s sweeping jobs and families spending plans that dispatch about $400 billion to get people with disabilities off wait lists and bolster the workforce supporting them.

And on the state level, Sen. Sally Harrell has proposed a measure that would dramatically increase state funding over the next five years to fully fund the waitlist. Her bill would also block the state from capping services – as is currently being proposed for the 188 people.

The Atlanta Democrat estimates that it would cost about $140 million over five years to cover about 1,800 waivers each year.

But Sofferin with DBHDD says an estimated cost to fund all the waiver slots could not be calculated because individual needs are ever-changing and the services would depend on an assessment and a person’s preferences.

Harrell’s bill did not advance this session, but it remains alive for next year.

Harrell says she sees an opportunity to press the issue after the https://www.google.com/url?q=https://georgiarecorder.com/2020/05/05/coronavirus-creates-extra-hardship-for-workers-with-disabilities/&source=gmail&ust=1621978358669000&usg=AFQjCNHQPSioL2BC6m3sxdGjQ9FYjL8Zwg" data-wahfont="15">pandemic emphasized the vulnerabilities of those in the disability community. In March, the governor put people with disabilities and their caregivers near the front of the line for COVID-19 vaccines.

“If we keep this commitment for five consecutive years, there will be no waiting lists,” Harrell said at a press conference held late in this year’s legislative session. “And people will be living in their communities with the support they need, just as the Olmstead decision said they should back in 1999.”

The Olmstead decision is a U.S. Supreme Court ruling focused on two Georgia women who were voluntarily admitted to a state-run hospital but who remained confined years after mental health professionals said they were ready to move on to a community-based program.

The landmark ruling found that unjustified use of institutions to segregate people with disabilities from society constituted discrimination and violated the Americans with Disabilities Act.

Georgia also remains under a settlement agreement with the U.S. Justice Department after a 2007 Atlanta Journal-Constitution investigation uncovered the deaths of dozens of patients and triggered a federal investigation.

Devon Orland, litigation director with the Georgia Advocacy Office, said addressing the wait list for services that enable people with disabilities to stay in their communities would be a good start. But she said the state’s narrow criteria for the waivers also exclude people who likely need the support.

“People need to understand that congregant living is not safer, that it’s not cheaper, and more importantly, that it’s not living a real life if you’re stuck in a nursing facility,” Orland said. “If you’re 22 years old and stuck in a nursing facility, you have no access to living your life, and these services keep that from happening, keep people with disabilities from being cast aside.

This article was originally published in the Georgia Recorder on 5/25/2021.