Why stories of people with developmental disabilities matter 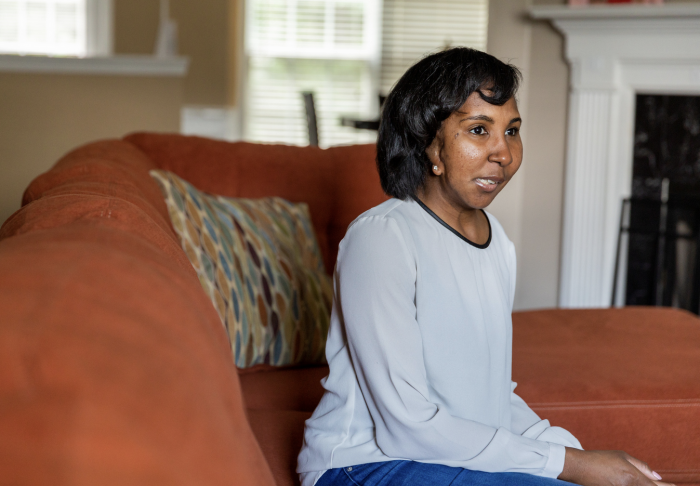 Rasheera Dopson, 28, of Decatur is among those whose stories were collected for the Georgia Council on Developmental Disabilities’ story project. She is on the waiting list for a waiver to get the financial help she needs to remain independent. “I feel like I’m in a gray area because I can work, but I still have a chronic health condition,” she said.

Every day I’m reminded that there is nothing new under the sun.

Our government’s failure to grant waivers to people with developmental disabilities who need them is a classic example.

Ten years ago, there were nearly 7,000 Georgians with developmental disabilities on waiting lists to get state services. Not much has changed. Today, there are 6,028 on the list. Nearly 50% of those people live in Region 3, the 10-county area that includes Gwinnett, Fulton, Cobb and DeKalb counties.

Ten years ago, Georgia ranked 49th in the nation for providing funding to residents with developmental disabilities. Today we rank 45th.

Some individuals haven’t been able to get help until after their parent or caregiver dies.

Unless you have a loved one with a disability, this might be another issue you haven’t given much thought about, but just for a moment, consider how you might feel if a waiver stood between your son or daughter or another close relative and badly needed home- or community-based services like help getting in and out of their wheelchair or bed or finding employment. Put another way, what if it stood between them and their ability to live independent lives? 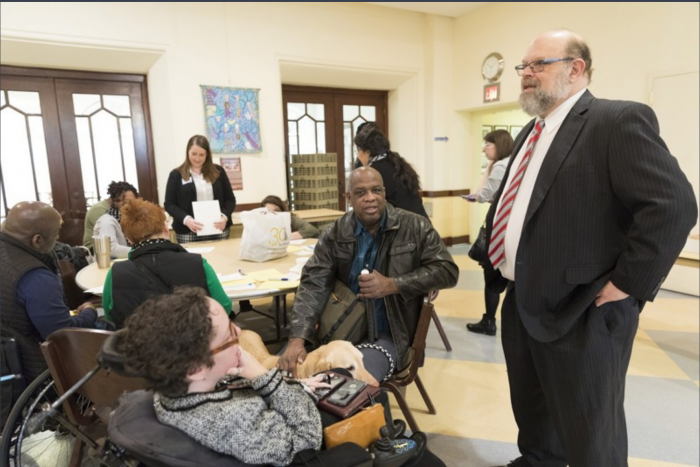 The stories chronicle the lives of Georgians from all 56 of the state’s Senate districts, and are easily accessible on the GCDD website (gcdd.org). They are funny, heartwarming and challenging. They are diverse, told from the perspective of those with disabilities and their families who lay bare their hearts on everything from employment opportunities, lack of transportation to the waiting list for Medicaid waivers. And they are necessary, especially when it comes to advocating for people who either can’t or don’t know how to advocate for themselves.

Jacobson said that the way the waiver program works, institutions and nursing facilities are required to be paid for by Medicaid, but home- and community-based services are considered optional services.

The state has to get a waiver in order to provide those services from the federal government, he said. They can cap the number of people they serve, but it’s really based on how much Georgia is willing to put in the pot because the feds will match whatever the state puts in.

More stories are being added to the GCDD website, along with a podcast, a short movie, and more interactive tools, in hopes of accelerating the project’s impact.

GCDD decided it needed to develop the project in 2017 after years of struggling to make state legislators aware of the needs of its constituents and to empathize with them.

“Even when we did Disability Day at the Capitol, that was our biggest challenge,” Jacobson said.

The agency put out a request for proposals to create a storytelling project. Last year, it contracted with L’Arche, an international federation dedicated to the creation and growth of homes, programs and support networks for people who have intellectual disabilities, to collect stories from folks in each legislative district.

Jacobson quickly realized how effective those stories were and decided to not only expand the story collection but also how it is disseminated. Hence, the website, a podcast, scheduled to go live Oct. 30, and a movie that’s still in the works.

“There’s no data without stories and no stories without data,” Jacobson said. “That’s really something those of us in the advocacy world have to live with every day.”

Without the human story — “this is who I am and this is what I need” — to connect with, it’s nearly impossible to get legislative backing. That isn’t to say the agency hasn’t had its champions. 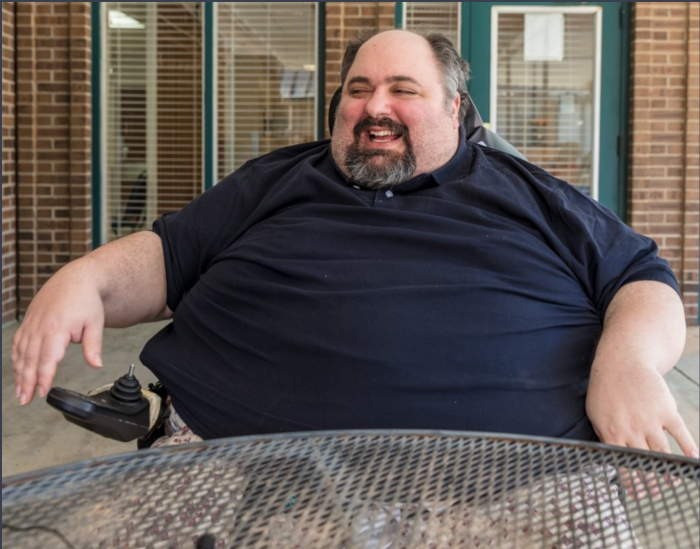 Nick Papadopoulos has cerebral palsy, which has led to severe arthritis and obesity. He wants to move out of his nursing facility, but the state keeps denying his request for a waiver.

To date, 82 people with disabilities have agreed to share their stories with us. You’ll meet 40-year-old Nick Papadopoulos, who has cerebral palsy and severe arthritis and lives in a Royston nursing facility; and 28-year-old Rasheera Dopson of Decatur, who has a cranial facial disability and a mix of medical issues.

Both are on that long list of people waiting for a Medicaid waiver. Papadopoulos wants to live on his own. Dopson needs help so she can continue to do so.

Judy Fitzgerald is commissioner of the Georgia Department of Behavioral Health and Developmental Disabilities, the state agency that administers the Medicaid waivers for individuals with intellectual and developmental disabilities.

According to her, some 13,000 Georgians receive waivers, and in the past three years, her agency added more than 2,200 waiver recipients, enabling individuals all around the state to thrive in community settings with services that match their needs.

For all practical purposes, what the GCDD calls a waiting list, Fitzgerald says is a planning list that her team monitors to determine who may need a waiver in the future.

When an individual’s needs become urgent, Fitzgerald said, the Department of Behavioral Health and Developmental Disabilities works to enroll him or her in waiver services. In addition to those receiving waivers, about 2,000 individuals on the planning list receive family support dollars, which can be used to defray the costs of everything from medical equipment to clothing and respite services.

“We hear directly from families how vital this resource can be,” she said.

However, Jacobson said Georgia has much more work to do.

“We’ve been working on this issue 17 years and haven’t made much progress as a state,” Jacobson said. “When you think about independence, I think about economic self-sufficiency, inclusion and integration in the community. If I can’t get the support I need to get out of the bed or to work, those things are not realistic for me to achieve. Without those waivers, most people will not be able to live independent lives.”

If you think this is about saving money, think again.

“It’s a matter of elevating it as a priority,” Jacobson said.

That’s why the storytelling project is so important.

Come January, Jacobson’s team will make sure it’s in the Legislature’s hands with the hope of flipping the switch so that they will finally do the work to trim that dreadful waiting list.

The original article ran in the the Atlanta Journal-Constitution Online on 9/13/19.