GCDD's Telling our Stories: Believing in What is Possible

Michael Griggs is a 34-year-old man living in Jonesboro, Georgia. When Michael was three months old, he came down with a very bad cold. It led to meningitis. After three months in the hospital, Michael came home, seemingly healthy again. However, by the end of his first year, his mother Mary and others who spent time with him began to notice that he was not hearing.

She says that she knows her son could hear before his illness because, before he went into the hospital, he would make lots of babbles and had begun forming pre-language "mama" type sounds. Afterward, he stopped responding. 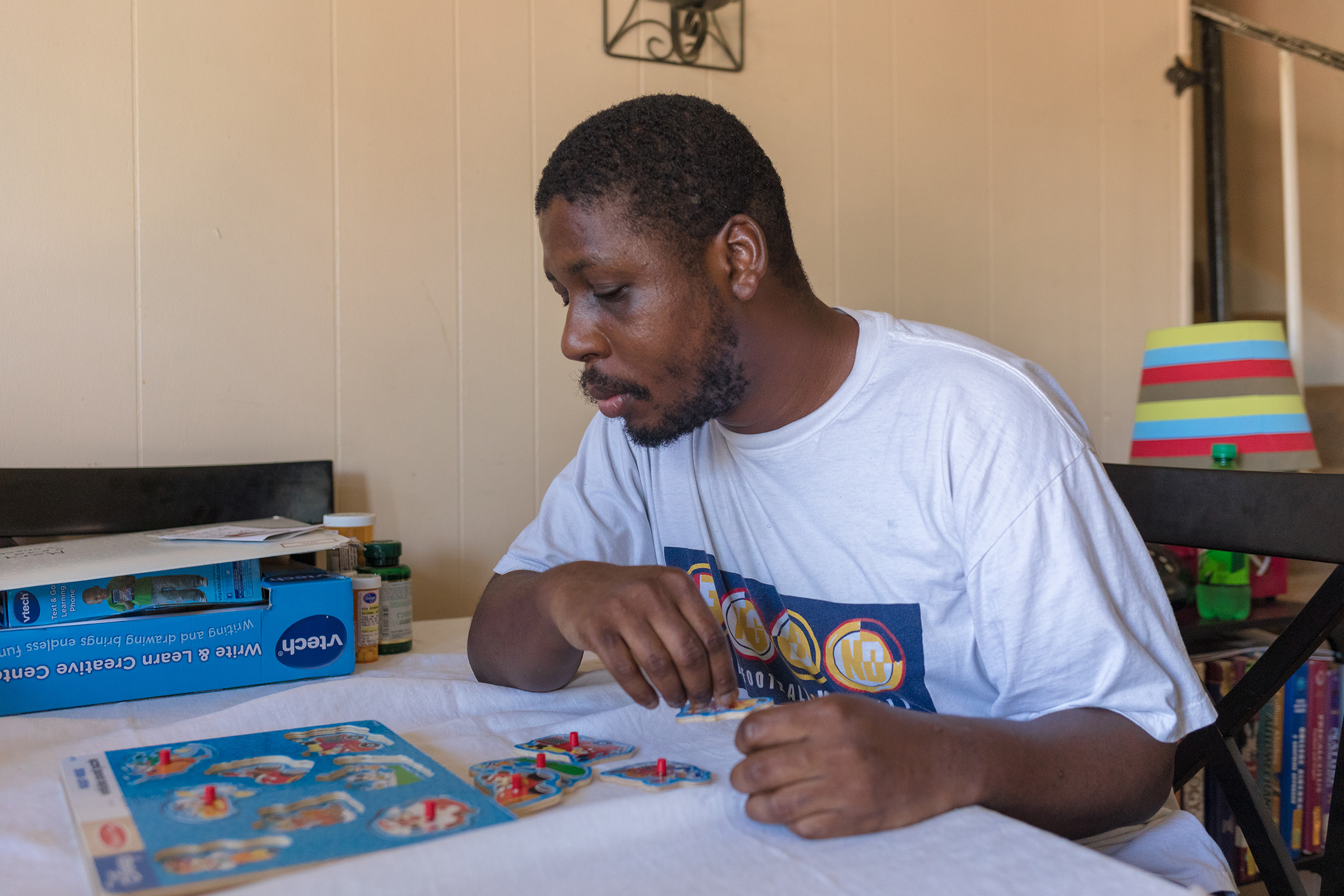 Mary has an undiagnosed learning disability herself. She is unable to read or write and ended her formal education after her eight grade year. Being able to take care of Michael has been very challenging at times. Mary has to work hard to stay on top of his paperwork and medications. Some things are made possible by the fact that he has SSI and a COMP Medicaid Waiver. So much more could be made possible if he had in-home assistance and the other supports that those services should bring to bear if Mary knew how to ask for them.

One of the most isolating aspects of Michael’s life is that he has no access to independent transportation because he and Mary live in a very rural part of Jonesboro. Due to this lack of mobility Mary and Michael are unable to easily visit the recreation center, the grocery store and other businesses that provide goods and services.

Their rural location does not stop Mary and Michael from staying active and serving their community on foot. Where others in their position might struggle with diabetes or other health-related issues, Mary makes a point to make sure they walk for their health. They volunteer for their church, World OverComers Community Church, by walking many blocks every week, distributing flyers and pamphlets as part of its ministry.

For a long time, the lack of knowledge of and access to supports and services meant that Michael’s days weren’t spent preparing for his future. He would spend long hours in his room with his building blocks, puzzles and cars. Michael had been out of school for five years, yet no one was helping him get a waiver or live an engaged life. Things started to change when he got his Medicaid waiver after nearly six years of waiting.

Beate Sass is an Atlanta-area photographer who connected with Mary a few years back while making the Real Stories, Real People photojournalism project. As Beate is also a mother of a young woman with a developmental disability, she became a friend and ally to Mary. Beate says, “It’s amazing how she’s managed. No one ever understood how much they were going through. She’s a fighter. She perseveres. She loves her child and has done all she can to help him along.” 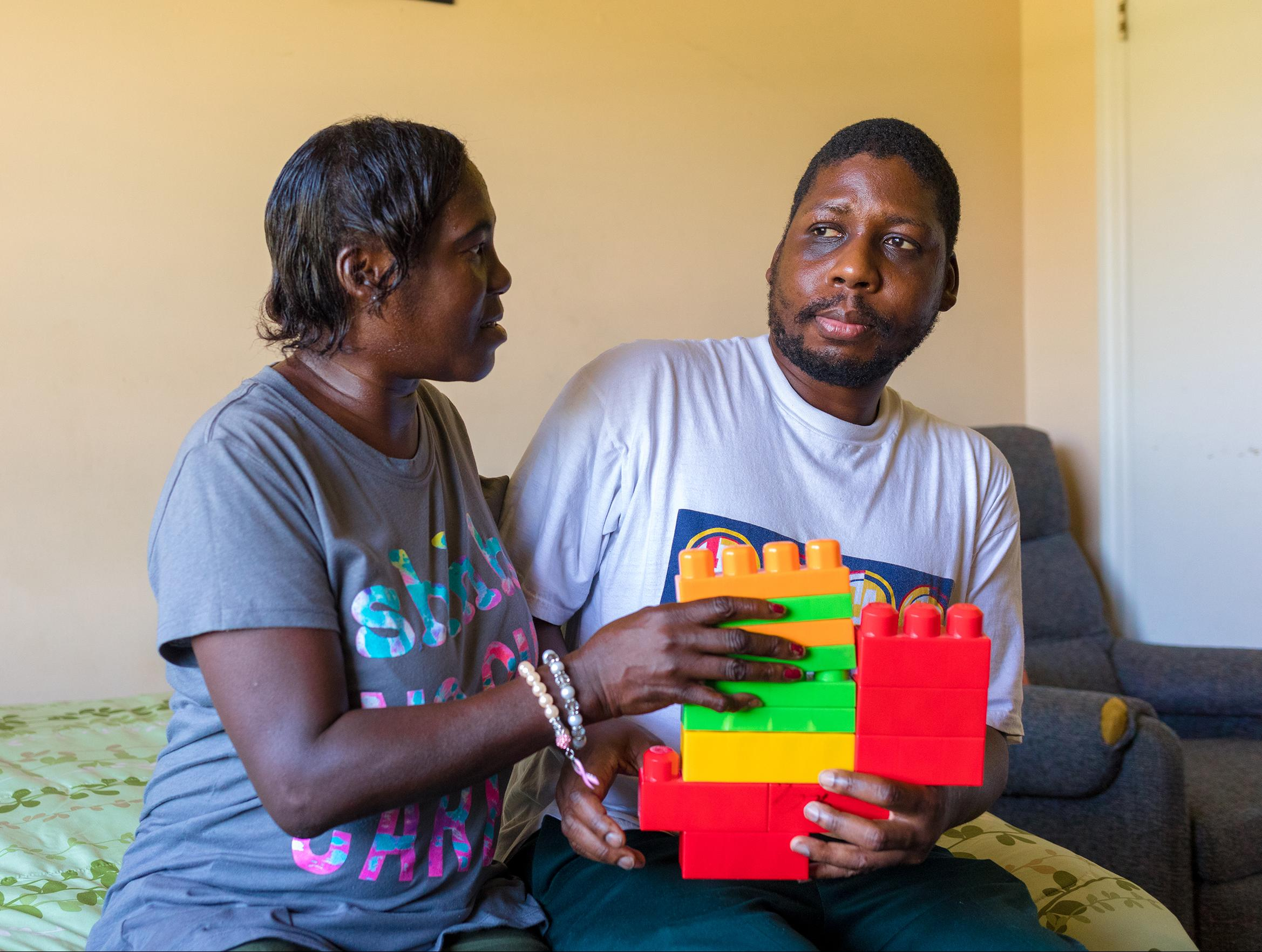 If Mary had a chance to sit down and speak with a legislator, she would want him or her to know some things about their lives, starting with the fact that she’s not going to be around forever. “I just want Michael to learn how to communicate for himself. If something were to happen to me, how is he gonna survive? How’s he gonna do things?” She goes on to talk about the fact that she still dresses Michael every day. “I want him to learn how to fix his own food. Maybe not on the stove, but still, learn how to do some things.” She speaks about her dream of Michael being able to make a sandwich for himself when he feels hungry, not just knowing how to do it, but also living in a place where he feels welcome to do that.

One wonders how Michael might have fared in a different situation, with more access to resources, more people joining with his mother and helping her to advocate for him. For them both, really.

In expressing her dreams for her son, Mary says, “I want him to keep learning. I do what I can at home.” Her belief in Michael’s capacity to keep learning is important. It’s a place from which to build a dream.

Read more stories about the experiences of individuals living with developmental disabilities in Georgia at Telling Our Stories, the Georgia Council on Developmental Disabilities (GCDD) Storytelling Project. The goal is to collect over 75 stories accompanied by 6-12 photographs, that will be instrumental in the efforts of GCDD to advocate for Georgians living with disabilities.

Download the large print version of the Fall 2019 issue.